You are here: Home » XX BANDZ 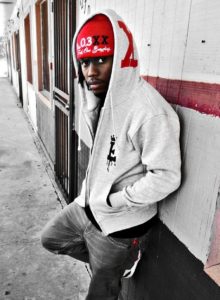 On September 3, 1989, on the southeast side of Houston Texas, known as Sunny Side Joshua Baxter was born. He would become otherwise known as 20/20 (AKA XX Bandz), a name derived from his vision and how he saw his life as it began to take focus and have clarity! XX Bandz learned at an early age the meaning of determination and diligence from his mother who provided for him and his siblings by herself in the absence of their father. When XX Bandz was 10 years old he picked up two passions, basketball and music. Baxter had a love for all genres of music from Country, to Alternative to Pop and Hip-Hop. In high School not only did Baxter play for the Basketball team, but he was also a stellar member of the High School Band in which he played the powerful Saxophone.

During his high school years his Saxophone was stolen, but his love of music could not and would not die. During this time XX Bandz became friends with Juan Leal (aka J. Streetz). In 2005, Leal introduced 20/20 to Acid pro, a program for recording music. From that point on music became more than a hobby for Baxter; it became his focus.
He recorded his first freestyle to a track titled “Forever” by 8-Ball ft. Lloyd. XX Bandz received a lot of positive feedback about the track. This encouraged him to start recording mix tapes and they became popular amongst his peers.

During his senior year of H.S., Baxter met Keith Siggers, who introduced him to Perthy “PJ tha RapHustla” Carson. Perthy Carson was at that time, a member of the recording group “Boss Hogg Outlawz”. The group was founded by Slim Thug a multi-platinum recording artist also from Houston Texas. Carson took XX Bandz forming the company Perthy had legal troubles which resulted in him being incarceration, leaving Baxter to play the role of CEO, promoter, manager and motivator all by himself. In 2009 tragedy struck again when one of Baxter’s closest friends Jackie “Jacko” Merchant was gunned down. This devastating event changed XX Bandz’s views on life and definitely his lyrical content. XX Bandz’s musical aspirations with Rap Hustlin Entertainment hit a slump, but No worries XX Bandz had a plan. Determined to take a positive step forward Baxter got back to the music and began recording an original mix tape. The mix tape was sent to various djs who passed up the young lyricist’s work because of his mature sound at such a young age. Finally, the music caught the attention of Timothy “TJ” Hester of (Bossgame Ent.) Hester noticed Baxter’s intense hunger and immediately assumed the role as Baxter’s manager; with Hester’s help XX Bandz’s music began to reach out to many audiences and soon resulted in collaborations with well- known West Coast artists such as Crooked I and Glasses Malone of Cash Money Records all the way in California.

While XX Bandz remained focused on the music, his manager TJ Hester worked hard to land his new artist a deal. In 2010 he finally caught the attention of Houston Legend “Scarface” and Multi-Platinum producer John Bido. Scarface was more than interested in doing business with Baxter; he was an actual fan of his music. This then led to XX Bandz being invited to work on Scarface’s 1st mix tape “Dopeman Music.” XX Bandz’s grind was undeniable.